Isle of Arran, isle of beauty, how my heart doth yearn for thee.
Western winds come gently blowin’, softly speak of my love to me. 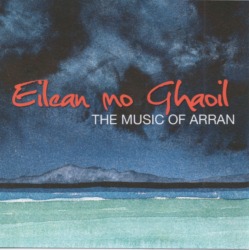 Those lines have been ringing in my head since I first heard them. I don’t mind, in fact; they’re sung beautifully by Ross Kennedy, and it’s about as good as earworms can get. This album is the brainchild of Gillian Frame, fiddler and Arran native, and if the Arran tourist board doesn’t adopt it as its official soundtrack (assuming there is such an animal as an Arran tourist board) then they’re definitely missing a bet. Had this album been recorded in any town I know, it would be on the front counter of every gift shop in the county.

This is not to dismiss the music as a mere marketing ploy. It’s terrific. Under the aegis of the Scottish Arts Council, Frame has managed some excellent arrangements and assembled a fine team of musicians. As it happens, there isn’t a weak track on the disc. Intriguing liner notes give glimpses into Arran’s musical history, with local anecdotes relating to various of the songs and dances.

Frame has produced something a little hard to define here. Put at its simplest, the album has the sound of some classic Celtic folk band that you haven’t happened to hear before. She has struck on a faultless balance of songs and dances – said balance, granted, being a matter of personal taste – and the members of her team play together seamlessly, like old friends. I have to tell you, I’m more than a little sorry that Frame’s ensemble seems only to have been put together for the project at hand. I’d listen to more out of this group. There are echoes of early Clannad, echoes of Silly Wizard and the Battlefield Band; but those are only comparisons, for the band has very much its own sound. (If it reminded me more of the Tannahill Weavers, indeed, that would make some sense, as Kennedy used to play with the Weavers.) Nor does Frame’s own fiddle or viola dominate the mix: where her leadership makes itself felt is in the blend and the consistency of the sound she’s arranged. Kathleen Graham’s Gaelic vocals and Ali Hutton’s pipes stand out more than any strain that Frame plays for us here. The more closely I listened for her strings, the more I found them supporting, modest, and precise. There isn’t a lot of flash in Gillian Frame’s fiddling, and I mean that in the best possible sense: because what there is, instead, is a great deal of grace and clean skill. Her playing fairly screams, ‘Don’t listen to me, I’m just the fiddler – listen to the music.’ If there can be such a thing as self-effacing virtuosity, Gillian Frame might just be the rare bird of that feather.

The title of the collection means “Beloved Isle,” and Frame makes it clear just how dearly she loves her Arran. Indeed, she’s succeeded in evoking a fine sense of yearning for the place in my own breast, a homesickness for a place I’ve never set eyes on. Communicating an effect like that to these somewhat jaded ears qualifies the album as a work of genuine art, for my money. This album is the first I’ve heard of Frame, and if you’re in the like case, then I suggest to you that it’s worth keeping an eye on her. (Or an ear, more to the point.) Winner of the 2001 Young Scottish Traditional Musician award, this album makes an impressive roadmark one decade down the line. I was surprised, in fact, to learn of her youth. The sound of her fiddling, and the album as a whole, reflect a maturity and restraint that suggest a veteran’s hand at the helm. Take a listen to Eilean mo Ghaoil:  The Music of Arran. Player, co-producer (along with Angus Lyon, who plays keyboards at various angles on the album – e.g., accordion, piano, and melodica), arranger, director, and singer – Frame wears many hats, and they all look good on her. Start wondering, with me, if we’re hearing one of the future giants of the field.

Eilean mo Ghaoil:  The Music of Arran has a Facebook page.

Lars Nilsson is in to his 60s and works with cultural issues in his hometown Mellerud in the west of Sweden. He has a lifelong obesession with music and has playing the guitar since his early teens, and has picked up a number of other instruments over the years. At the moment he plays with four different groups, specialized in British folk, acoustic country, Swedish fiddle music and the ukulele.
Lars has also written a number of books, most of them for school use, but also a youth novel and a book about educational leadership. He joined the Green Man Review team in 1998.